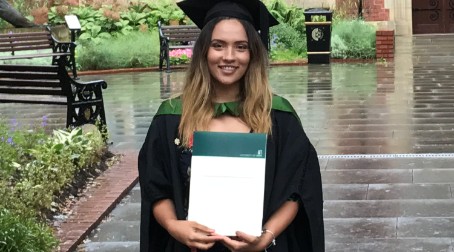 Jessica Quimpo has been named as 2017 prize winner by the British Pharmacological Society.

Jessica Quimpo has been awarded the British Pharmacological Society’s “BSc Pharmacology Prize”, one of only 13 winners in the UK for 2017.

Scoring the highest overall degree classification of her BSc Pharmacology cohort, Jessica was nominated primarily for the outstanding performance in her final year research project for which she achieved the top mark amongst all 173 enrolled students.

Jessica said: “I conducted a systematic review and meta-analysis to determine the most effective non-metformin pharmacological therapies for Type-2 diabetes mellitus. The question came about after research into the diabetic field and identifying gaps in the evidence base.”

Dr Dan Donnelly, Programme Leader for Pharmacology, said: “Jess’ final year project was a systematic review, undertaken in full accordance with Cochrane Review/PRISMA guidelines and it was the first time such a systematic review had been undertaken worldwide – as such, it was accepted for registration on PROSPERO, the international register of prospective systematic reviews and meta-analyses.”

Dr David Lewis, who supervised Jessica’s project, said: “The review was a massive undertaking. Working as part of a team of three, Jess and her partners discovered and analysed over 2700 published clinical trials. Jess played a full and equal part in this team effort, inputting ideas into project design, implementation and interpretation. Jess then took her individual dissertation to the next stage, individually investigating the influence of ethnicity on bias and reproducibility of these published trials. The exceptional quality, thoroughness and standard of her research was reflected in the mark awarded.”

Jessica added: “It was really challenging as I had never conducted this type of research before, but it allowed me to develop skills in critical analysis of scientific data and self-directed learning. Furthermore, I gained confidence in working autonomously and collectively in a team. These skills will be vital in my progression as a scientist and in my future career in pharmacology.

“I really enjoyed learning about type-2 diabetes – a very prevalent and important disease of our time, and having the opportunity to explore the detailed mechanisms behind the action of oral anti-hyperglycaemic drugs and their adverse events. Furthermore, this research demonstrated how the National Institute for Health and Care Excellence (NICE) use clinical trial data to influence their guidelines on the treatment for disease.”